Guess what I did a couple of weeks ago?  Here’s a hint: 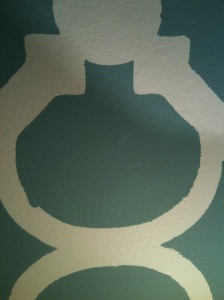 Still perplexed?  Let me back up a little more… 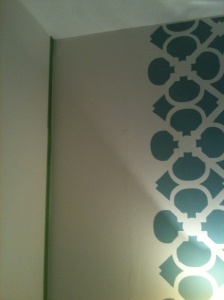 If you guessed that I painfully stenciled the massive blank wall in our master bedroom over the course of two separate Sunday afternoons, while simultaneously drinking and crying and freaking out, then you are a genius!  Here’s the widest shot that I have readily available: 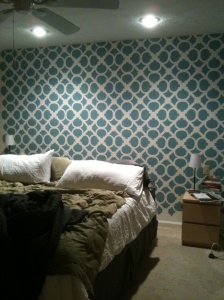 I still have to finish the bottom edge, which can’t be seen when the bed is pushed back against the wall, so try not to judge me too harshly, mmmkay?

I bought the stencil from cuttingedgestencils.com and followed their video tutorial to a tee.  Rather than rehash the process for you, I’ll just give you a couple of little tips that I picked up along the way:

I have a really difficult time coming up with big art for large blank walls, so this seemed like a good idea at the time.  I originally waffled between kelly green and royal blue, but indecisiveness won out and hubs is picked this teal color, Bon Voyage from Behr.  I love the color, but in hindsight, probably should’ve picked something lighter so the mistakes would be less obvious.

There are so many options when you’re re-doing a room from scratch that I constantly second guess every choice that I make.  I’ve texted hubs twice today alone to ask if he hates the bedroom wall.  He insists that he doesn’t.  I’m insecure about it, but also pretty lazy, so it’ll be there for at least the next 12 months.  I’m thinking of renaming my blog “Insecure but Lazy and Also Thirsty Annie.”  Thoughts?

Here’s a preview of my next bedroom project.  This one might kill me. 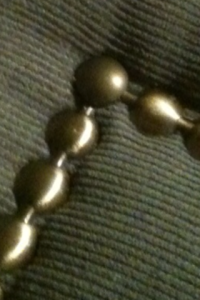