*ahem* I apologize for the delay in, well, posting anything for the last couple of weeks.  I’ve been tired.  My brain, specifically.  And sometimes I get lazy and just don’t feel like posting, well, anything.  But!  Here is a rundown of where I’ve been and what you’ve missed (if you’ve missed it).

Hubs and I ran a 5k so we could hopefully get a better seed in a big 10k that we run every summer.  But it turns out that our 10k time from 2 years ago got us a better slot than our 5k time from a few weeks ago, so it was pointless.  At least I got a not-horrible race photo out of it:

This is the last 0.1 miles, right when I realized that my shoelace, which was holding my car key in place, was coming untied, which was inconvenient to say the least.

We also made the annual trek to Savannah, Georgia to celebrate St. Patrick’s Day with hubs’s parents and all of his best friends from high school.  It was SO much fun.  I especially love the sweet hats that my mother-in-law bought for us to wear.

St. Paddy’s is like Christmas in Savannah.  Everything is closed, everybody watches a ginormous parade, and my father-in-law picks us up when we’re drunk and ready to come home…so it’s more like a prom that everyone goes to, really.

Buster was especially exhausted from all of the excitement.  We also found out on this car ride that he hates motorcycles.

My mom’s birthday was on Saturday, so, being the young adults that we are, my 3 sisters and I took her to see The Hunger Games on Friday night.  I was so excited to see the movie, but it was hard not to notice all of the differences from the book that I don’t think I enjoyed it as much as I will the 2nd time around (when I force hubs to take me again (later this week)).  My oldest sister hadn’t read the book, so seeing her reaction to things like the part where they revoke the 2-winners-from-1-district rule were priceless (“Seriously?!?  Are you kidding me!?!”).  We also sat in front of a row of 11 year olds, who screamed “My life is oooooover!” everytime Katniss and Peeta kissed.  I assumed they were not on Team Gale.

I will admit that every time Katniss and Peeta had an emotional moment, I couldn’t stop thinking about this: 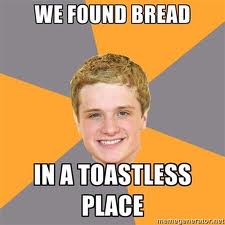 That is pretty much all that you missed while I was being lazy and not blogging.  The end.