Skip to primary content
hi, my name is anne and i’m a middle child.

growing up, i was the second of 3 girls.  my older sister is 2.33 years my senior, and my younger sister is 2.97 years my junior.  there is a fourth sister, but she was born when i was 13 so she’s basically a whole ‘nother generation.

[my shirt is backwards here.  probably because i was a neglected middle child.]

recently, i’ve had multiple people with children ask my opinion on the welfare of their youngest if they have another kid.  one posed the question with concern by asking, “how do you think our second will fare, you know, if we have…a third?  will they be okay?”  another posed the question almost with contempt: “well we have the two, and we WANT more, but we don’t want the second one to suffer, you know, as a middle child.”

can i just say something here?  being a middle child is AWESOME.

as far as i’m concerned, my childhood was a freaking blast.  i was always flanked by my sisters.  i was the 2nd of 3 but i always felt special and unique.  i got to try every sport i had a hankering for.  i got to quit every sport i had a hankering for after 1 year when i got bored with it.  i liked team sports the best because i wasn’t solely responsible if we lost.  once i got good enough at tennis to move from doubles to singles, i quit, because i didn’t like the attention.

[totally content being the mickey to my older sister’s minnie.]
i had my own birthday parties, i had my own identity, and it was the best.  no regrets, yolo, and all the jazz.

now i also must disclose that i was a painfully shy child and did not like attention.  one time, at the mall of america, i made my younger sister return something for me because i was too embarrassed to talk to the salesperson.  i didn’t like attention in the first place, so not being the center of it did not pain me one bit.

and as an adult, there is no pressure to show up to things because i’m the only child or one of two or something.  i never felt like i was compared to or competing with either of my sisters.  i like being part of a crowd and being able to slip in and out, taking a backseat and watching from afar.  i am comfortable with this.

[which is why it is EXTRA weird when hubs and i are the only “kids” at his parents’ house at christmas.  it’s like someone holding you down and tickling you and watching to see if you pee your pants.]

[just because they didn’t let me sit in the chair with my sisters doesn’t mean i wasn’t loved equally, probably!]
here are some fun facts about middle child syndrome that i found on the interwebz, and would like to dispel:
“Middle children often feel left out and invisible” – just the way i like it!

“Middle children tend to be more outgoing and flexible than their older and younger siblings.” – not even a little bit true in my case!

“Middle children tend to be ‘rebels,’ more so than their other siblings.” – nope, i am a giant chicken!

“Middle children are characterized by low self-esteem and extreme introversion, sometimes even leading to psychotic behavior.” – no…wait, am i a psychopath?  tbd. 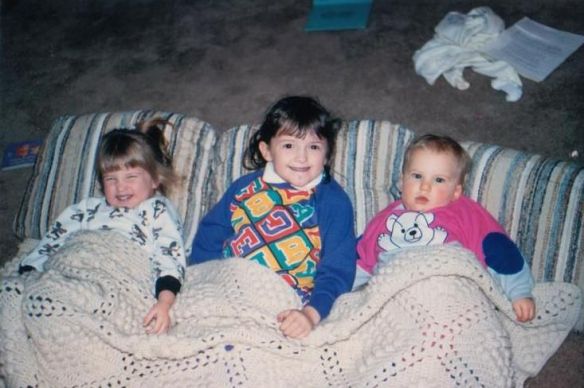 [if i close my eyes will i disappear completely? i wondered at the tender age of 4.]
now, are there times when i wished i was maybe a little more at the forefront of my parents’ thoughts?  maybe.  has one my parents’ forgotten the “e” on the end of “anne” on more than one occasion?  perhaps!  are there downsides to being a middle child?  probably.

but current and future parents, you need to calm down.  love your kids all the same and they will turn out fine.  and if they complain about being a middle child someday, tell them to calm down, too.

[see? WE ARE AWESOME!  everybody calm down.]

1 thought on “middle children are okay!”