it is rare that i wake up on a saturday morning with a fire lit under me to get stuff done, but it happened this weekend and i am so proud of myself, and of hubs because if it was up to him we probably would’ve laid on the couch and watched soccer all weekend (like football and baseball aren’t enough, now we are watching SOCCER, you guys!).  but he helped me be productive, and for that, i am grateful.

here is what we did:

i painted our upstairs hallway the same gray color that we used in our living room/den downstairs (behr dolphin fin).  gray is my favorite neutral – it is so soothing and makes me feel happy.  there are 6 doors in this tiny hallway, but thanks to frog tape and a steady hand, i did not cluck it up.  i want frog tape to be the godfather of my children.

all i have to do to connect this hallway to the space downstairs is paint the 2-story stairwell.  i mean…

i will probably pay someone to do this so i don’t die trying.

technically this is from last weekend, but we finally hung our new-ish TV on the wall of our bedroom.  i feel like such a grownup with a wall-mount TV!  and it swings out.  swoon.  this week i’m hoping to hang some other framed art around it so it doesn’t look so lonely.  we hung it there b/c that’s where we were sure there was a stud without electrical wires running around/through it.  safety first.

the lighting situation in our living room was in need of an upgrade, so we picked up these two floor lamps from ikea.  sometimes ikea just fits the (super cheap) bill.  the pharmacy-style lamp on the right is so HEAVY, you would never guess it was ikea.  and the one on the left went behind the couch and matches one we already have on that side of the room.  i think shaded floor lamps are soothing and this one met our needs.

we also picked up some supplies to help organize our kitchen.  these magnetic spice tins from ikea are so nifty.  now i actually have to use them, by cooking.  fyi, the red “spice” is actually bacon bits, because of course!  we also picked up these super cute le parfait jars from crate and barrel to hold the chia and flax seeds we put into our smoothies every morning.  never thought i’d need a container for seeds.  and we bought a jar for our stevia supply, which we have a ton of but never use.  but mama loves her a good jar.

while at crate and barrel, i found this placemat that completes my life.  the colors are amazing and the pattern is a good combo of geometry and whimsy.  i’m obsessed.  if they made a wallpaper like this i would plaster my house with it.

we did a quick run through dillard’s yesterday where i found the cutest and most comfortable brown wedges for $24.99.  they are real leather and it took me less than 5 minutes to find them and pay for them.  i’ve been in the market for some new wedges since my old go-to’s started to smell, so i felt like i won the shoe lottery with these babies.  buster is skeptical.

he loves to creep into all of my pictures.  the least he could do it hold still so he’s not blurry.

lastly, i made my own wood stain this weekend out of steel wool, coffee and vinegar (recipe via pinterest), and i don’t have an after because the shelf i stained was still wet last night and also i forgot, but it did turn my hands black so i had to paint my nails this poopy brown color that i already hate in order to hide all the stain in my cuticles.  shoulda coulda woulda worn gloves.

i realize that is probably not a very exciting weekend to most, but getting so much done made me feel so alive!  i also drank lots of smoothies and german beer and overall had a very delightful time.

i capped off my weekend by staying up until midnight to watch the oscars.  buster watched them with me, sort of.  he slept like this for the first 90 minutes. 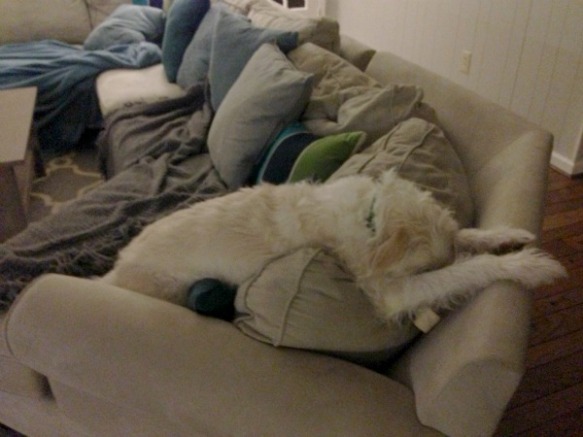 1 thought on “gettin’ it done”