Our last day in Paris (sob) started with a quick trek up to the Sacre Coeur Basilica in the Montmartre area north of the city center. Here’s how it looks on a normal sunny day:

And here’s how it looked when we saw it:

If I had to use one phrase to describe the weather on our trip, it would be schizophrainic fogpocalypse (see what I did there?).  It rained on and off for the entire trip, but that’s okay, because it allowed me to get shots of Paris like this one that a coworker complimented me on because, “You can always google a picture of Paris on a clear day…but your pictures are really depressing.”

We had a lot of creepy moments during our 10 days in Europe, but probably the creepiest of all was the band of misfits that was loitering near the base of Sacre Coeur.  It goes like this:

A man walks up to you holding a string between his hands and saying “Hakuna Matata!” which, due to my experience with bums on the streets of Atlanta, immediately put me on high alert. So I put my hand on my purse and say, “No thank you.” The man proceeds to approach me with the string, saying, “No no, hakuna matata, it’s okay!” Then he GRABS MY ARM, so I yell, “NOTHANKYOUDON’TTOUCHME!” and quickly shuffle past him. There were four of us and probably 6 or 7 of the Hakunas, and we all miraculously managed to evade them.  I didn’t see it with my own eyes, because he was behind me, but I heard that hubs turned into the Hulk and practically threw them to the side, but I don’t know, I can only speculate.

It turns out that their trick is to make you think they’re going to give you a friendship bracelet of sorts, but instead they TIE YOUR FINGERS TOGETHER and refuse to untie you until you give them money.  They’re entrepreneurs at heart, after all.  Crisis averted, but lesson learned: If you hear the words “Hakuna Matata” in public, turn into the Hulk and run for your life.

We then grabbed some breakfast and wandered through the Montmartre area looking for things we never actually found, such as Van Gogh’s house.

We finally made it to Moulin Rouge, which looked nothing like it did in the movie: 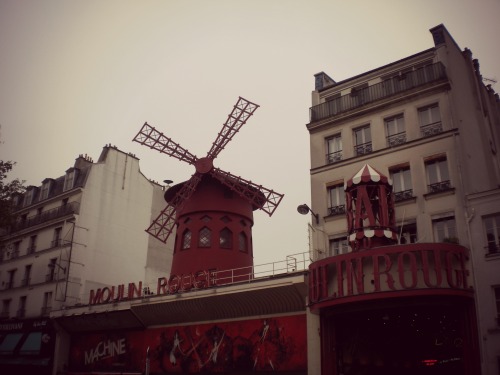 After learning our lesson about trying to walk too far, we took the subway down to the shopping district so we could pick up some waaaaaay cheaper in France Longchamp bags.  We headed to Printemps, the famous department store, which has an amazing rooftop cafe where you can take pictures of the entire city.  And also shop your face off.

We took our time strolling back toward the river, passed by the Louvre and the Musee d’Orsay one last time, before catching the subway back to our ‘hood, where we picked up a last box of glorious macaroons.

We weren’t actually leaving Paris until the next morning (Sunday), but the person who checked us in and out of our rented apartment came by on Saturday to make sure we hadn’t destroyed the place.  When she asked about our dinner plans and we said we had none, she called an amazing hole-in-the-wall steak restaurant and asked for a table for four, in French.  I wanted to hug her and stroke her hair and never let her go.  We said goodbye, got gussied up, and went to eat at Robert et Louise.

The restaurant only has room for about 5 tables total, and all of the meat is served on wooden plates, while communal bowls of salad and roasted potatoes are passed around.  It was an amazing finale to an incredible trip. 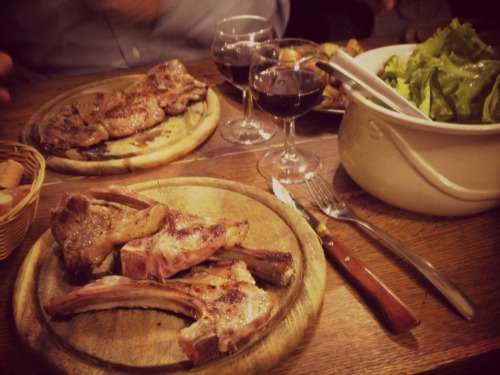 The next morning, we got up and went to the Eiffel Tower one last time to try to climb at least part of it…but it was pouring rain (shocker) and about 1,000 tour buses had already beat us there.  So we took a few shots of its underbelly and bid the Eiffel Tower adieu. 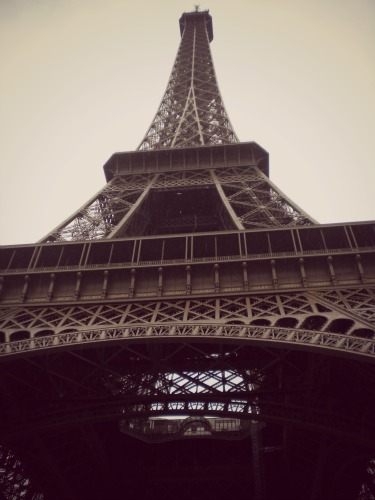 We followed the advice of our host lady and took the Roissybus from the center of Paris to Charles de Gaulle airport for our flights home.  It was a hell of a lot easier than changing trains 3 times with all of our luggage.  And of course by the time we left, it was 70 and sunny across Paris.  Go figure.

Just finishing my recaps of our trip makes me sad that it’s over all over again.  It was a long and sometimes grueling but ultimately amazing trip with good food, great friends, and experiences I’m sure none of us will ever forget.