Somehow, some way, this week I have given myself a kick in the ass, and decided to run 20 miles.  It wasn’t on purpose.

Sunday: Went to a local park with a 5k loop.  1st mile hurt, 2nd would’ve felt fine if it weren’t for the STUPID hills, and 3rd felt awesome, except then it was over.  In the last 100 yards, a questionable-looking man waved at me and tried to get me to stop, but since I was on a roll and am not interested in being kidnapped, I kept running past him as I politely smiled.  He then gave me a thumbs up and said, “Perfect teeth!”  Which was nice of him, I guess.

[Moral of the park run is: Buster doesn’t slow me down.  I was just as slow by myself as I am when the dog is with me.  I guess I can’t blame him anymore for my running sucktitude.] 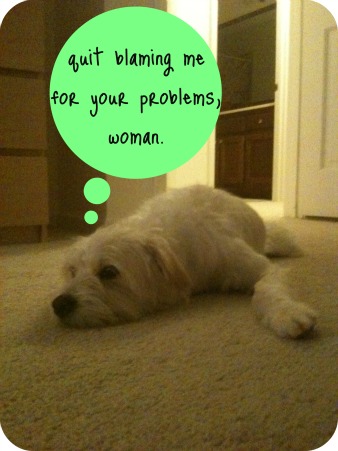 Monday: Hubs and I went to the same local park, except we ran on a track that loops around two pee wee football fields.  Each lap was 0.3 miles, and it felt like it took forevvvvvver to finish all 3 miles.  But I did it.  Hubs has started casually training for an urbanathlon, which is FREAKING NUTS, so he did various lunges and burpees and sprints, while I jogged in circles just fast enough to not be walking.  Running laps is so boring.  I also forgot my shuffle so maybe that had something to do with it.

Tuesday: Dreary weather in Atlanta, so hubs and I headed to the gym, and I treadmilled it.  I decided just to run at a leisurely pace, and OMGYOUGUYS, I run so slowly!  A comfortable, sustainable pace for me was 4.4 mph.  FOUR-POINT-FOUR.  Running that slowly allowed me to run for almost the full 45 minutes that I was on the treadmill, but goodness, my legs are short.  This run felt better than the other two though.

If I’m going to do 20 miles this week, I’ll need to run 3 miles each of the next 3 days, and then 2 on Saturday.  I think I can do it.  If not, then I will publicly admit defeat on the interwebnets, which would be humiliating (if anybody read my blog).  I think I can I think I can…