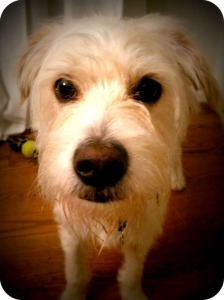 He did one of those last minute 360° spins before squatting to drop the biggest deuce I’ve ever seen him drop, and his leash was tangled up under his butt and before I could get to him, contact had been made.  Good thing that retractable leash was on its last leg anyway, because into the trash it went.

The weird thing is, if Buster has dirty feet after a trip to the dog park, he freaks out if I try to wipe down his paws.  But last night, I was all up in his behind business with baby wipes, and he didn’t so much as flinch the entire time.  We have a white couch, so it was of the utmost importance that all poo remnants were eradicated from his rear end before we let him back into the house.  Mission accomplished.